It brings us great sadness and with a heavy heart to announce the sudden & unexpected passing of Pastor Bruce Rivers of Mount Moriah 1st Baptist Church of Dos Palos, Ca. On 2/12/21 he entered the gates of Heaven. Pastor Rivers was a great servant, ambassador, and advocate for God. He loved life and traveling around the country bringing God's word and Pro-life messages for the unborn. He just spoke at UFL protest rally on 1/21/21. He also spoke for Alpha, San Francisco West Coast Walk for Life, Washington DC Walk for Life--where he met Dr. Alveda King, niece of the late Dr. Martin Luther King Jr., Issues 4 Life Oakland, Ca, Walk for Life in New York, radio talk shows and much much more.

He will be deeply missed. 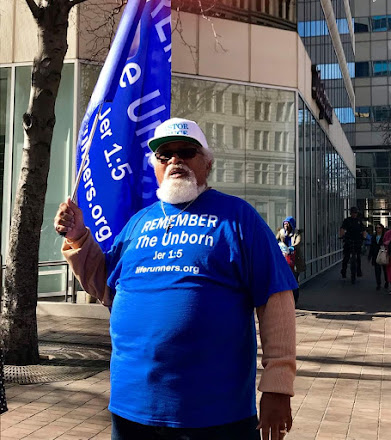 Posted by United for Life Merced at 2:40 PM No comments:

Posted by United for Life Merced at 1:19 PM No comments:


A Personal Reflection and Thoughts:

After weeks of researching abortion for this website, I feel sick. I feel like the evil in the world is so prevalent. I feel like the truth is being censored. I feel depressed after reading stories about babies left to die. I feel disheartened after reading stories about how women are proud of their abortions. Just look at photos of abortions and feel your spirit crush. I feel like hope is almost snuffed out by prevalent evil in this world. I dread logging onto this website to discover more bad news about abortion. I will continue to research even though the subject is grim.

As I look up articles, it is obvious how biased the internet is. 20 links automatically pop up under a google search and every one is skewed pro-choice/pro-abortion. The truth is becoming harder and harder to find or even allowed on media. Articles and videos I remember viewing 10 years ago in high school and college have disappeared. I eventually got fed up, and started using a different search engine. I updated the United for Life Merced website with many pages and links because they are becoming harder to find under Google.

Although I have to have a strong stomach to look up more devastating facts about abortion, I can only hope that change will come. Truth will win. Our Light will defeat darkness. Hope will not disappoint. Our weapon is prayer. Pray for abortion to end.

Some facts with a bit of hope, but still devastating:


-Stephanie
Posted by United for Life Merced at 4:28 PM No comments:

Choice is a Powerful Thing

Choice is a Powerful Thing

When I was growing up, my parents, especially my father, had little sayings and lessons they were always teaching my sister and me. Things like, “You can hear me now and believe me later,” or “a gun is always loaded.” The one I remember best is: Choice is a powerful thing.

The older I get, the more I understand the significance of choice.  Growing up, my parents did their best to give us the information we needed to make our decisions and then, if it wasn’t dangerous, let us deal with the consequences of the choices we had made.  I have never been a very adventurous person so I learned more from watching my sister and my parents handle the consequences and rewards of the choices they made, than my own. I have a strange knack for seeing what other people do and learning from it as if I had done it myself.  I do not learn things the hard way most of the time.

With this foundation, somewhere I picked up the information that contraception is not one hundred percent effective.  I can’t remember where I learned this. It might have been my parents, or sex-ed, or the TV, or something I read, but I learned it and it stuck.  While most people might look at something around a two percent chance of failure as safe, I filed it under “possible consequences”. As a result, I made the choice very early that I would not have sex with someone I did not love, believing that if we were in love, we would stay together and I wouldn’t become a single mother.

Over time this conviction became a pledge to wait until I was married.  If he wasn’t willing to spend the rest of his life with me, I didn’t want to risk having a child with him and thereby linking myself to him for life. Now that I am older, I understand more of the nuance in this.  I understand that you can be blinded by affection and emotions for a person. I have been in bad relationships in which I was too blinded to see how unhealthy they were (this is where I learn things the hard way).  One particularly bad relationship was headed toward marriage, but thankfully that was derailed, in part through my father’s patient insistence that I could do it if I wanted, but I would always be welcomed home. One advantage I think I did have in not marrying the wrong person was I didn’t allow a sexual element into the relationship.  Sometime after making my decision to wait for marriage I picked up the information that you are more likely to stay in a bad relationship if you are sleeping together. That bond can blind you; its kind of meant to.

Now, I know I had some advantages in my plan.  I was not a particularly attractive kid. I had my first boyfriend in high school, a relationship that lasted all of two weeks.  I spent the rest of my four years in high school pining for him so that prevented any other relationships. In addition to not being super sought after, I was raised by my biological parents who are still married.  So, I get it, I had an easier time keeping my pledge than other’s might.

I share all this simply as a way to show a mindset that isn’t often presented.  With the foundation of choice being a powerful thing, and the knowledge that contraception is not fool proof, I decided the only way I could be sure to avoid being a single mother or being pregnant when I didn’t want to be, was to not have sex.  To abstain until marriage. While I was taught about safe sex, I remember thinking it was a ridiculous notion because it wasn’t really safe was it? There was that small percentage of failure. That potentially devastating failure.


Is it better to have “safe sex” than unsafe sex?  Of course. But I will always believe abstinence is best because there is no failure rate.  Safe sex shouldn’t be a primary technique, maybe a back-up for moments of weakness. I think the notion of being responsible for the consequences of our choices is important.  Yeah, it’s not a huge possibility that contraception will fail, but it IS a possible consequence. We have to decide if we want to take that risk. I didn’t.

Posted by United for Life Merced at 1:16 PM No comments: